Magery is the skill that allows your character to cast spells out of your spellbook, using mana and reagents, or to cast a spell from a scroll, using mana only. There are 64 spells in UO, arranged into 8 Circles. The higher a spells circle, the more difficult it is to cast. Certain spells can be less or more effective, depending on the magery and Evaluate Intelligence skills. Magery is an intelligence based skill. 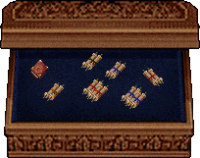 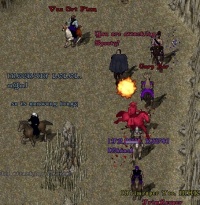 A couple of spell-casting mounted mages are fighting each other in Destard.

To successfully cast a spell you do not only need the spell in your spellbook and reagents, or a scroll, you also need enough mana and the appropriate magery skill.

When casting a scroll, the game treats that scroll as if it were 2 spell Circles lower in order to determine chance of failure. (For example, if a player were to cast the 8th Circle spell Resurrection from a scroll in order to restore a fallen comrade to life, that player would have to be able to cast 6th Circle spells and would have a chance to cast that scroll equal to his success rate of castng spells of the 6th Circle.) The amount of Mana normally required for spells of the same Circle of the scroll is consumed during the casting of a scroll, regardless of success.

You have 80 magery skill. You cast Ressurection, an 8th-level spell. You have roughly 70.5% chance of success. If successful, you lose 50 mana, and the scroll as well.

Take the difference between your Magery skill and the minimum casting requirements for a spell 2 circles below the spell being cast, and multiply the result by the average percent gain of one skill point, which is 2%-3%, or 2.5%.

* Every skill point from the minimum Skill necessary and beyond provides, approximately, an additional 2% to 3% chance of casting Spells of the this Circle, until the maximum of a 99% chance of success is reached. (Circles 1, 7 and 8 do not follow this guideline exactly).

If you plan to train your magery with macroing, ensure you have enough gold available, or a steady income, to keep providing your training mage with enough reagents.

Training magery without Resisting Spells is less expensive and you can macro in town.

(the ranges below apply to both skills)

* Firefield can take you from 0 to 55 resist in about half an hour, just cast the spell and run end to end along the longest distance of the field, this should be 5 tiles. If you started with magery at 50 you should also reach about the same magery skill[55] by the time you're done. Then simply proceed with the above guide from Lighting Bolt.

This example macro uses a restock agent (Razor feature) to allow restocking from a bank box. Furthermore the use of the Meditation skill drastically increases the casting frequency and thus the training-speed. It is only suited to be used within a guard zone, where spells do no damage, otherwise it had to be extended by a hit-points check.

This macro example is a copy right out of the Razor Macro Textfile. The macro ensures, that the caster has enough hitpoints to survive the spell (Energy Bolt in this case). If the mana is too low, it starts meditating. 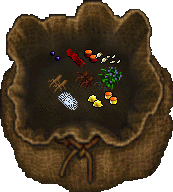 The vendors in Alchemy- and Mageshops sell reagents of all kind. Buying reagents from NPC vendors is the most effective way to acquire them. For prices check the article about Reagents.

A couple of monsters drop reagents as part of their loot. But usually this loot drops don't cover your reagents expenses for killing them. An exception is the use of provocation to kill the monsters, when the investment of reagents for offensive and defensive spells is minimal.